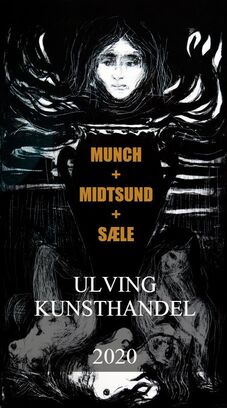 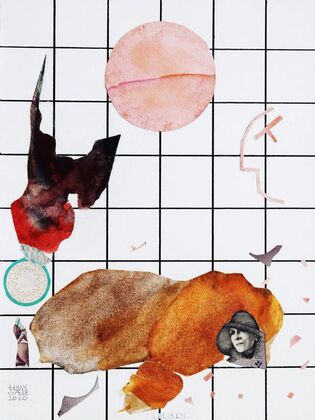 A Beatles​ autograph inspired me to sign the printycons with a ballpoint pen, preferably a Fisher Space Pen.
The inspiration to sign the printycons with a ballpoint pen comes from an autograph image I once owned: a photo of  The Beatles from the early 1960s signed with ballpoint pen by all the four group members. The pointed ball pen signs that engraved into the glossy photo paper fascinated me. This is the direct inspiration for the ballpoint pen signature on the printycons.
A big size Breaking Wave painting by Hans Saele bought by the Norwegian State's Ministry of Justice and Public Security, PST, Oslo
This was some years ago. When I delivered the big painting I wasn't allowed to enter the building because of security regulations, but I see it now and then on TV, hanging  in the bacground when the PST is having a press conference 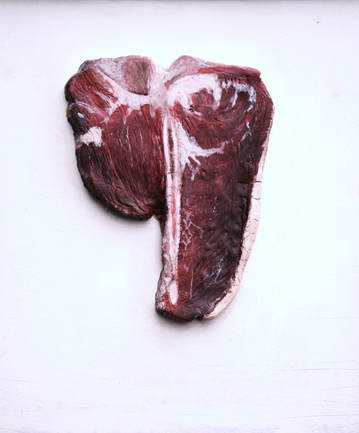 Printycon of this artwork from 1982 is now available
Artwork by Hans Saele stolen
from Kunstnernes Hus in Oslo!

One of my  T-bone sculptures was stolen from a group exhibition at Kunstnernes Hus (Artists' House and Norways most important contemporary gallery) in Oslo, Norway, 1984, and has never been tracked by the police.
The easily recognizable T-bone sculptures was presented on juried exhibitions and was regarded highly original works of art back in the early 1980s.

To the left a T-bone sculpture similar to the one that was stolen, clay and acrylic, 1982. (There is also a picture of the stolen one)
Artists' House in Oslo, Norway 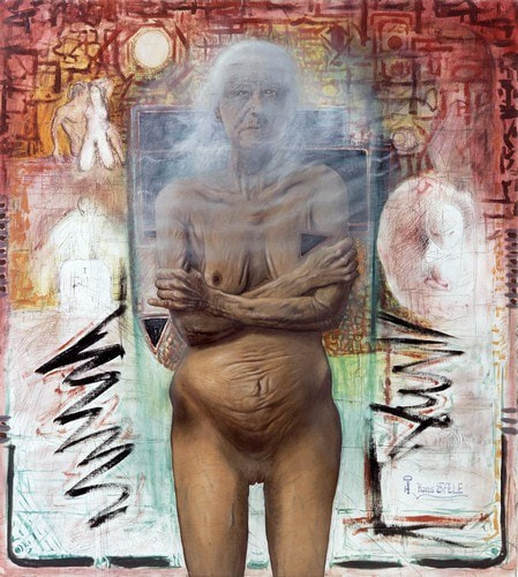 Story of a painting called Cyclus
​This was back in the early 1980s.
The model for the painting was, surprisingly enough, a rather young woman. Very sympathetic.
Obviously the painting wasn't supposed to look like this at all?
The model told me openly she was a former prostitute. Luckily she got out of it, but at a high price, almost killed by her pimp, beaten so hard that she ended up in a hospital and was in coma for weeks. And then there was the following trial, secret addresses and so on.
While modeling she told several stories from her earlier profession.
After she'd gone I realized the painting was far from finished and I worked intensively on it throughout the night and during the following month.
First I had a stonewall background, then I changed my mind and started painting it in a fusionist style instead. The painting took a complete new direction, and suddenly this old firm proud woman appeared, grew (so to speak) out of the canvas as a manifestation of a strong self placed in the center of the cycle of life.

I called the painting Cyclus.
The Cyclus painting (size ca. 100x90cm.) has only been exhibited a couple of times. I remember a gallerist putting it in the back room, afraid his audience would be offended by it. 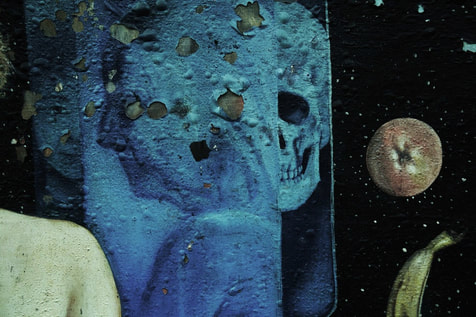 ​The Fire Painting
​ The painting from the early 1980s survived a serious house fire.
​I got the "destroyed painting" back from the owner of
the house - and noticed immediately that it has become
"quite a rare piece of art".
​ "In excellent state!"
And a greate mystery to everyone that it wasn't totally burned up, like the rest of the interior. 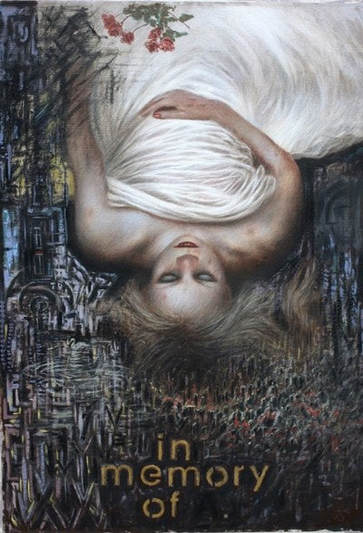 In Memory Of
I - like too many others - have known several OD victims, one of them was a woman who died of a heroin overdose.
She was found dead in her bed - dressed in her old wedding gown.
​I remember her smile and positive attitude back in school days.
​But the heroin took it all.
The painting is intended as a memorial of those (we once knew) who overdosed on heroin and other drugs. Many at an early age.
I think the title is obvious and correct.
​In fact I'm proud of the title.
A precise title on a painting like this is highly important. 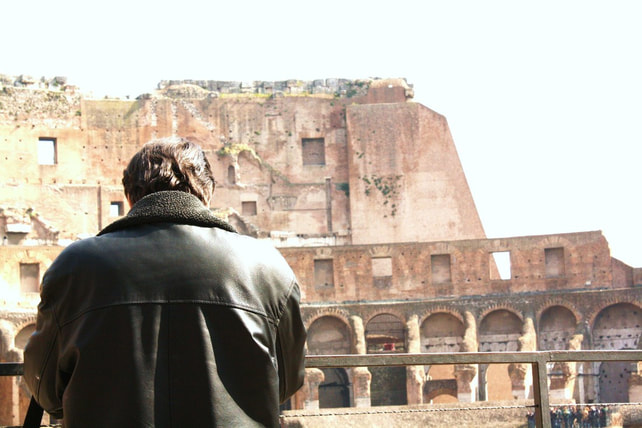 ​An inspirational moment
In Rome springtime 2015 (surprisingly cold).
My lovely wife took the picture of me overviewing the Colosseum, or the Flavian amphitheater as it originally was called.
I had earlier written some articles about the Flavians: Vespasian, Titus and Domitian, and knew something about the amphitheater, that it, among other things, was financed with the treasures looted/stolen from the Jews in Jerusalem in the year 70 AD.
It's said that Colosseum was build by 12000 jewish slaves. And that it took around ten years finishing it.
The Colosseum was not quite finished when it opened. The first opening - a ceremonial opening - by Vespasian Cæsar, was in spring 79 AD, shortly before Vespasian died, and exactly 666 years after the destruction of the temple of Solomon.
Second opening (regarded as the first by many) in August 80 AD - by Titus Cæsar (the amphitheater was still not finished). 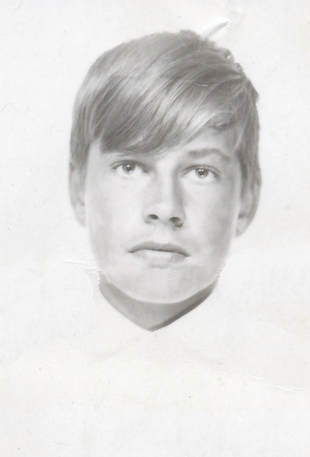 I remember that summer day in 1968, hot and sunny,
I was thirteen turning fourteen in September.
I had started painting in oils two years earlier and enjoyed playing Stephen Heller and Bach on the piano.
I read Stalingrad by Theodor Plievier.
​And I was a pretty good swimmer.
​The Beatles was still on everybody's lips.
Was I trying to figure out what to become in the future?
No, I didn't care.
​This was the arrogant 1960s.

© SaeleImages ​
About the first Atelier Bjerkelund
​The first ​Atelier Bjerkelund (1995 to 2016) was in a building from the 1960s located in Stokke, Vestfold, Norway. The building was demolished for no reliable reason by the local government in October 2016 (after earlier refusing selling it to me). Someone was obviously making serious money on tearing it down, that's probably the simple explanation.
No country in the world - measured by its population - is tearing down more fine buildings from the 1960s-70s and 80s than Norway - one of the most personal relationship-corrupted countries in Europe, and with a rapidly growing poor population.
TIL MINNE
Lars Mollbrink, min gallerist i Sverige gjennom mange år, døde 30 -1- 2018, 85 år gammel.
Galleri Mollbrink er et av Sveriges største gallerier.
Den første handelen jeg gjorde med Lars Mollbrink var allerede i 1976.
Gjennom årene har jeg hatt to separatutstillinger hos galleri Mollbrink i Uppsala, flere utstillinger i Mollbrinks galleri i Kungshamn, samt deltatt på en rekke kollektivutstillinger i Sverige og USA i regi av Galleri Mollbrink.
Samarbeidet med Lars Mollbrink har vært særdeles godt og vellykket.