Musical training
​Started his musical training at the age of seven, under the guidence of Meyer Pedersen, a  professional  church organist in Larvik, Norway.
Continued under the guidence of  the pianist Tyra  Lind  in Horten  until  late teens. Tyra's brother,
​Carl Victor Lind , was and artist and especially his work in coal hanging in Tyra's studio fascinated Hans Saele.  Carl Victor Lind had emigrated to USA in 1927 and found work as a drawer for New York Herald Times. In 1930 he started an art school along with Arshile Gorky, an early abstract expressionist.

Been working in oil colors since the age of twelve
1966, september, first oil painting after receiving oil paint in gift from his mother.

1975, winning an art competition in Oslo
The competition was arranged by Lions Club, Oslo, and Aftenposten, Norway's biggest newspaper.
Article with picture of Hans Saele and the winner- painting in Aftenposten.
The painting "Behind the Iron Curtain" was bought by the art dealer and collector, Erling Pedersen.

1977,  became acquainted with the swedish heraldic artist Sven Sköld
who visited Saele in his studio

​The Peace Child-scandal
Caused some major art-scandals in Norway in the late 1970s - early 1980s.
In 1979 an elderly woman fainted at the opening of a H.E. Saele exhibition, in front of a painting  called "The Peace Child" (the painting showed a crucified child), and, in front of the present journalists.
The exhibition was immediately closed and the Peace Child painting temporarily confiscated. The headlines wrote "Art Shock!"
This was, according to the leading national news papers, the biggest art scandal in Norway during the 1970s.
The following heated debate lasted more than a month. Saele was defended in the press - among others - by an art historian and a bishop.
The peace child painting was sold and the money was given by the painter to an organisation working for Vietnam boat refugees.
A year later Saele got the painting back - in exchange for another painting. He then destroyed the Peace Child painting.

The Primal Cry-scandal
In 1981 Saele burned - in protest - a painting called The Primal Scream, after the painting had been removed at the opening of an exhibition at Sandefjord Art Society (Sandefjord Kunstforening).
The board of the art Society meant the pastel painting of a menstruating woman performing primal scream therapy would shock the audience, and again a Saele art show was closed down. A debate on the "Shocking art of Hans Saele" lasted for several weeks in the media.
Background for the painting:  A female friend of Hans Saele comitted suicide by freezing to death on a hill. She had told Saele that she sometimes practised primal scream therapy in the woods when she menstruated. Her tragic death was the inspiration of the Primal Scream painting.
A disturbed woman came to Saele and told she identified herself with the woman on the painting and wanted to know the exact location of where the "Primal Cry painting" was burned. She threatened to burn herself to death on the exact same spot.
Saele told her he "unfortunately couldn't remember the exact location".

Going anonymous
Saele went anonymous from around 1984 after a quarrel with one of the leading newspapers in Norway, Dagbladet.  A quarrel that was taken to the Norwegian Broadcasting Corporation, NRK ( Lisa Strindberg "Streiftog i Kulturlivet).
Saele gave up a conventional "art career", and took only part in some few exhibitions such as Gallery Mollbrink, Uppsala, Sweden, Stockholm Art Fair and Gallery Art Now, Gothenborg, Sweden.

Fusionism and Abstract Reality
Saele consider himself being the first (of his knowledge) in Europe using  the terms "Fusionism" and "Abstract Reality" in painting.

The stolen T-Bone sculpture
In 1984 one of Saele's hyper realistic T-bone sculptures was stolen from a group exhibition in "Kunstnerenes Hus", Oslo,  the main contemporary art gallery in Norway.

1985 Working a full year with stone lithograhps in  Oslo

2016 Hans Sæle's long time studio in Stokke - a solid building from the 1960s -  is burned down by the local gouvernment after refusing selling it to the artist.
Establishing Art Yard Academy, an international forum for presentation of the different art expressions of  Hans Egil Saele (now writing his full name).
​
2017 Starting the Grid series, a series of watercolor paintings in grid patterns

Styles (ism's)  "Yes I'm a serial painter!"
Works mainly in fashion of  "Nature" and "Fusionism", often in thematic series such as the Heroin series,
the Lonely Lone series, the Lake of Gog series, the Breaking Wave series and so on.
The latest and ongoing is a series of watercolor paintings called the Grid series.

Said on the fusionist paintings of H. E. Saele:
​"I hold these images for work of art that goes beyond
the present  time."
Professor Aleksandra Bielecka 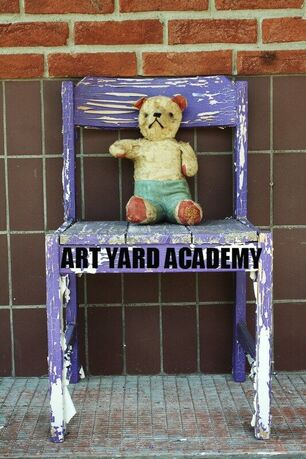